This is an extract from my
Spring Term 2016/17 'SEN Update' entitled:
“It’s Better When You Do It Twice"
that was released on 6th January 2016.
Don’t forget, to ensure that you never miss out, you can get my SEN updates by completing your email details below, reading it on our ‘SEN.fyi’ App, or by following me on one of the Social Media platforms that I use, which are at the bottom of this page. 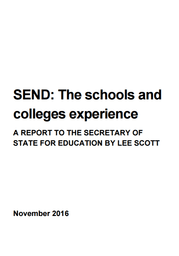 
Which leads me on nicely to this section.

I know that many years ago there was widespread media attention over the publication of the Scott report (about the Government selling arms to Iraq), but there was also another lesser-publicised Scott report published last year (by the Government) written by Lee Scott, published in November 2016, entitled: ‘SEND: The Schools and Colleges Experience (A Report to the Secretary of State for Education)’.

This was also a short report, running to just 13 pages. In his introduction, Lee Scott (an ex-MP and well-known advocate about SEND for many years) said that he had spent 2½ months speaking to parents, young people, schools and colleges and had also met with a range of individuals who provide services and support directly to families.

‘It is important that this report is seen clearly for what it is. I have not undertaken a long-term, scientific study of the national landscape, nor can I claim that I have heard from a representative sample of parents and young people. Discussion did not follow a set structure, but was deliberately open to allow people to express themselves without constraint, which I believe helped to ensure that what I heard was frank and real. The nature of the work that I did, and the time I was able to devote to it, necessarily meant I had to rely on a limited sample. That said, it was apparent that some of the same themes arose in a number of discussions and written representations I received, and my report focuses on these.’

His key themes covered ‘Communication’,’ The Right Level Of Support’, ‘Funding’, ‘Legislation’, ‘The Voluntary And Community Sector’, ‘The Link Between Education And Health’, and ‘Age 19 Upwards’.

The best summary that I could find was on the Council for Disabled Children (CDC) website, which stated:

‘Lee Scott has years of experience working with young people with SEND and has been an advocate for disability campaigns, including the UK Autism Foundation. His fieldwork put him in touch with more than 200 parents and young people. In summary, his findings were:


When reading the report myself, I was most struck by what Scott said about ‘Communication’, so I have quoted some of it here, as follows:

‘Communication
I think this lies at the heart of things. I was pleased to hear several examples of families who had had good experiences of the system. A common theme was that, when families were properly engaged, this often led to trust and understanding. Where that was achieved, the quality of support for children and young people was higher, and families had a more realistic understanding of what a school, college, or local authority could provide. In some ways, this is even more important for children and young people with SEND who did not have Education, Health and Care (EHC) plans. For those children and young people, who are on SEN support (i.e. support provided by schools and colleges where needs are not severe enough to warrant an EHC plan) sometimes it’s less clear what the child’s or young people’s needs are, or schools and colleges may not always identify and understand their needs in the same way their parents do.

Communication works both ways – it’s not just about being nice to each other, it’s about being clear, honest, and assertive. It’s also about empathy – something that isn’t always easy to achieve, if, for example, you’ve had no personal experience of caring for a child with SEND, or if you have little understanding of the issues faced by children who are adopted and their parents.
…
The fact that some people are getting this right means that it’s possible for others too. It’s not really about funding – it’s about culture and systems. It would be good to find ways of capturing and replicating good practice in this area. I also feel that it’s important that the government, and other leadership agencies, continue to send out strong messages about the importance of good communication with families. Improvement in this area, across all agencies and in every area, would go a long way to making a reality of the ‘person- centred’ approach the SEND system is trying to achieve. It has the power to be transformative.’

The report has received both praise and criticism. For example, the Council for Disabled Children (CDC) said:

‘This is a useful addition to the information we have about the lives of children and their families and the recommendations should be taken seriously.’

However, I also read one criticism, which stated:

“Anyone who thinks that dialogue alone is now the way to resolve our problems should reconsider, in the same terms with which Oscar Wilde viewed marriage: if the Children and Families Act was the triumph of imagination over intelligence, the Code of Practice is the triumph of hope over experience”

For my part, I see this new SEND framework (can I call it ‘new’ still, given that we are now in 2017 and it came into force in September 2014?), as still a ‘Work In Progress’…
With best wishes