TWO HEADS ARE BETTER THAN ONE

This is an extract from my
Spring Term 2016/17 'SEN Update' entitled:
“It’s Better When You Do It Twice"
that was released on 6th January 2016.
Don’t forget, to ensure that you never miss out, you can get my SEN updates by completing your email details below, reading it on our ‘SEN.fyi’ App, or by following me on one of the Social Media platforms that I use, which are at the bottom of this page. 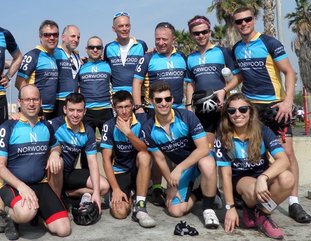 
In November 2016, I successfully completed my 7th annual 5-day international bike ride to raise funds for Norwood, a charity that supports children and young people with disabilities, using my specially modified recumbent trike.

As you probably already know, I have a degenerative, neurological condition (Cerebellar Ataxia). Five years ago, my life was changed, as with my friends, Paul (Tuhrim) and Stephen (Harrison), to support me, I went on my first (and I thought last) international bike ride across southern Israel.

Since then, I have cycled with (various flavours of) ‘Team Douglas’ across Sri Lanka, Madagascar and Israel (twice) and then twice more across Israel with my son, Zachi; something that I never dreamed of. By doing this, we have now raised well over £150,000 for Norwood.

This time we (including Zachi) cycled across northern Israel again, up the steep climbs of Golan Heights, over Mount Tabor and across the spectacular mountain pass from Ein Herod to Nordia.

But this time was a very special ride for me as, not only did I do it again with Zachi, but I was joined this time also by my friend Sam (Cohen), who also has a degenerative condition called Usher Syndrome. This means that Sam was born with partial-hearing, but has progressively also lost all of his sight over the years, so that he is now totally blind.

Imagine cycling blindfolded on the back of a tandem controlled by someone else, but also having a pair of earplugs in so you can’t hear very well.  Frightening, isn’t it?

It took a little while for us to convince Sam that he could and should do this ride (he cycled with another friend of ours called Ashley [Fulton]). I warned him from the start that it would be one of the best experiences that he would ever have in life and that, once he had done it, his life would never be the same again.

Well, I can happily confirm to you now that, having seen it with my own eyes, Sam’s life has been totally transformed, first in the few months leading up to the ride, then the week of the ride itself.

Although there is no doubting the effort he put in, the sense of achievement it gave him and the great week he had, for me, one of the nicest things was that, as a surprise, Paul and Stephen also flew Sam’s wife out to see him come in at the end.

In fact, Sam has now got a very busy social life, going to the gym and also ‘Spinning’ classes every week;  he is now even signed up and preparing to run a half-marathon next year, tethered to Stephen!

As I put it at the end of our fundraising page, this time entitled ‘Team Sam and Douglas’:

This time we are making twice the effort!”

So you see, it’s better when you do it twice…
With best wishes