TIME TO MOVE ON (PHASE TRANSFERS) 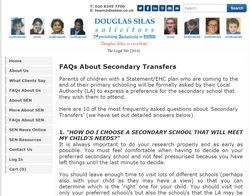 For example, those of you involved with children and young people with Statements of SEN/Education, Health & Care (EHC) Plans, are probably already aware that, for many years, there has been a statutory legal deadline of 15 February for Statements (and now also EHC plans) to be amended by their Local Authority (LA) in Year 6, ahead of a transfer from Primary to Secondary school that September. This is supposed to allow sufficient time to appeal to the Special Educational Needs & Disability (SEND) Tribunal, if they dispute the school or placement named.

However, the problem with this, is that a normal appeal to the Tribunal usually takes about six months or more, due to the following:


*[The frequent need for parents to also appeal against other parts of the EHC plan as well, in order to justify a change of placement/the school wanted, is one of the most commonly misunderstood issues and is often not realised by many parents/young people until the day of the hearing itself when the Tribunal themselves say that, as a consequence, they are now restricted in what they can do!]

The 15 February deadline was decided upon arbitrarily many years ago, when appeals usually took around three to four months (a different/shorter timetable was followed at that time). This meant that, theoretically at least, appeals about transfers to Secondary school would usually be heard by the Tribunal before the end of the academic year in July (although I recall that there were a few that had to be heard in the Autumn term still).

Over the years though, appeals have become more complicated and now also follow a different/longer timetable. This means that, since the Tribunal does not usually hear appeals in August (as it is hard to get witnesses together during the summer holidays),  if the Tribunal were to follow its normal timetable of 20/24 weeks, then the hearing of the appeal regarding the appropriate Secondary school that a child should attend in September, would not be heard until October/November.

This would leave many parents in the unenviable position of having to decide whether to send their child to a Secondary school proposed by the LA, which they consider inappropriate (or may not want them to go to for other reasons), or to keep them out of school and educate them at home (or extend their summer holidays), in the interim. Neither of these options are satisfactory, as they all have their advantages and disadvantages.

To try and rectify this, in recent years the Tribunal has adopted an ‘expedited’ (i.e. shorter) timetable of 12-weeks from registration to hearing. This means that, even if parents leave it until the last minute of the two-month appeal deadline in which to appeal (i.e. by mid-April if they have received an amended Statement/EHCP by mid-February), these appeals should still, theoretically, be heard by the end of the academic year in July.

“That all seems fine” I hear you say.

But it gets worse…

As I am sure that some of you will already have noticed, the difficulty now is that, in appeals concerning EHC plans, if parents leave appealing until the last minute, but then also extend the time in which to appeal by 30 days, because they have obtained a certificate of mediation close to that deadline (perhaps they are waiting for a report or similar), then the Tribunal is going to struggle to hear the appeal before the end of the academic year, if still trying to keep to a 12-week timetable.

So the Tribunal has now also been agreeing to sit in August where possible or necessary, to ensure that everyone knows where the child is going to Secondary school in September.

But it gets even worse…

In respect of Post-16 transfers, there has never been a legal deadline for LAs to name new school placements for Statements and Statements couldn’t name other placements anyway, aside from schools (e.g. colleges). They also only went up to 19 years old.

As for EHC plans (which, theoretically, go up to 25 years old), from this (academic) year onwards, the legal deadline for LAs to amend them to name a college/placement for the forthcoming September in respect of Post-16 transfers, is only by 31 March in the academic year before (or at least five months prior to the transfers). This means that young people (if they are over 16 and are deemed to have ‘mental capacity’), or usually their parents (if they are over 16 and are deemed not to have ‘mental capacity’), may then not have enough time to appeal to the Tribunal by the end of the academic year in July/by the beginning of September.

Last year (where the legal deadline was even worse, as it was two months later, by 31 May), the Tribunal decided to automatically apply a 7-week timetable for Post-16 appeals, so that they could be heard by the end of July/in August).  Following concerns expressed by a number of people (mainly LAs), as to how they were expected to deal with appeals like this in such a short space of time, the Tribunal has said that this year, they will instead automatically apply a 12-week timetable also to these types of appeal, but will be willing to hear more expedited appeals within 7-weeks, provided both sides agree to it.

It’s all a bit of a mess really isn’t it? From my perspective, anecdotally, a number of LAs are still struggling at the moment with carrying out transfers from Statements to EHC plans and regarding amending Statements/EHC plans in relation to Secondary transfers and Post-16 (and over) transfers.

So there is not much more I can say about this, apart from the fact that I am currently trying to help as many parents/young people as I can, who have found themselves in these kinds of situations.
With best wishes