Firstly, let me say Happy New Year to everyone and wish you for a good and peaceful 2016. This is my first update for the ‘chronological’ year 2016.

​In this update you will find sections entitled:


As I always say, I know how busy everyone is, so please feel free to read just the sections that are of interest to you, or read everything; the choice is always yours.
(Don’t forget, to ensure that you never miss out on one, you can get my SEN updates personally by completing your email details, or by following me on one of the
Social Media platforms that I use, at the bottom of this page. 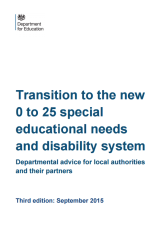 MORE OF THE SAME?
(TRANSFERS OF STATEMENTS TO EHC PLANS)
Since the new SEN framework came into force in September 2014, nearly a year and a half ago now, after difficulties with initial changes, we now all seem to be falling into a general and steady pattern of doing things.

As you may know from my previous SEN updates, one of the main issues that has taken up the most time for parents and professionals concerned with children and young people with Statements of SEN, is going through the transfer process to convert their Statement into an Education, Health & Care (EHC) Plan.

This is known as a ‘Transfer Review’ (individually) with timescales set by Government or in the Local Authority’s (LA’s) ‘Transition Plan’ (generally).

As you may also know, I write a regular legal ‘Question & Answer’ column for SEN Magazine. Over the past year or so, I have been exploring some of the new issues that have been brought in by the new SEN framework, such as ‘Personal Budgets’; ‘Post-16 Issues’;  ‘Outcomes’; 'Working Together’ and these further issues of ‘Transferring Statements to EHC Plans’ and ‘Transfer Reviews’ (as well as looking at the new SEN framework initially and then again one year on).

Although I specialise exclusively in SEN, I deal with a wide range of cases.  During this past year though, the most asked about issue that I have had from parents coming to see me, is the question of ensuring whether they/the LA are transferring their child’s statement to an EHC plan properly.

Unfortunately, when the new SEN framework was brought in, the Government probably issued unrealistic timescales to convert the 230,000 or so Statements to EHC plans, between September 2014 and April 2018.

Obviously, with the substantial funding cuts that there have been during the last few years (which have resulted in many experienced people losing their jobs and some services closing), there has been the combined effect with these legal changes, of many people now trying to do too much, with too little and now, often, too late.

Since September 2014, no new Statements have been issued and any assessments that have been requested or carried out, have been considered EHC needs assessments, which either lead to an EHC plan being issued or one of the following scenarios:


This is the same as it was before and therefore parents (or the young person themselves if they are now over 16), can appeal against any of these decisions to the SEND Tribunal. However, there have been increasing difficulties with transfers.

LAs now have the requirement to transfer all children and young people with Statements to EHC plans, either during a set time, or in priority order (which is too long and detailed to go into here). Importantly, all Statements must be transferred to EHC plans where a significant review of the Statement would have normally taken place at a time in their educational career (e.g. a move of school, particularly from primary to secondary school or from secondary school to a Post-16 institution).

I could spend this whole update telling you what should and should not happen with transfers, especially as I am seeing both parents and LAs making similar mistakes time and time again. But this would probably only be of interest to those of you who are actively engaged in the process now or in the near future.

Also, I now often have to advise parents based on their individual circumstances, albeit within the wider context, as well as more strategically (and funnily enough, even though they know that I only represent parents, I have even been asked questions by LA officers themselves about what the best way to do things is!)
​
Suffice it to say, I strongly encourage everyone to familiarise themselves more with the statutory requirements and non-statutory expectations relating to the transfer of Statements to EHC plans or relating to the transfer of different groups, or to seek advice specifically.  You will also find a helpful timetable at the end of the Government’s Transitional Guidance which you may wish to read.

I hope that we are not just going to do more of the same now and thereby sacrifice quality for expediency just to meet targets – like the old adage says:
‘If something is worth doing, it is worth doing well”…

‘PINTEREST’ING, ISN’T IT?
As has become well known during these past few years, our website has become a useful resource site for people wanting to find out more about different Types of SEN/Disability.

I have tried to make each of the conditions that we have written about as accessible as possible, to as many people as possible, by using a format of ‘questions and answers’, interlinking pages where more details are written about a term/word used and even putting an audio file people can play on every page.  A few years ago, I also created links to other organisations where people could go, to find out further information.
​
Well, if you follow what I do, you will know that I am a great lover of technology as a way of helping people (and myself) get information or do things which helps them/others and I have found Social Media platforms like ‘Twitter’ and ‘Facebook’ and ‘YouTube’ to be very useful.

I have been noticing in the past year that people are increasingly using another Social Media platform, called ‘Pinterest’, to find or share information. So, I have now set up a specific ‘Pinterest’ page for each condition (which is linked to at the end of each of our current pages), where there are ‘pins’ to some useful organisations/websites that you can visit to find out more information.

As always, I hope that this helps people.

I am also hoping to add to our ‘Pinterest’ pages in due course so, if you also find useful things on the internet which you believe may help other people, please forward me the link by email here, so I can share it.

With my thanks in advance. 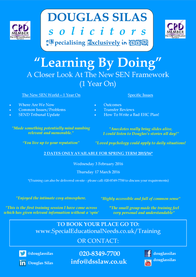 ​I’M TRAINING ONCE MORE…
Thanks to all of you who attended one of my training seminars during the Autumn Term 2015/16 entitled ‘Learning By Doing (LBD): The New SEN Framework (One Year On)’.

Please note that again, places are limited to 15 delegates per session, and that all training is CPD accredited.  You can download the flyer by clicking on the image below.
​
And once more, I am offering a 10% discount per place to the first three people reading this update that book for each seminar, using the promo code ‘SEN10’.
If this is something of interest to you or you want to find out more information/book a place, click here: 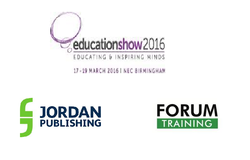 RECENT/FORTHCOMING SEN EVENTS
The last few months have been quite busy for me and the only SEN event that I managed to attend was ‘The SEND Framework: Compliance & Best Practice 2015’ run by Optimus Education at the end of November 2015.

As always, I enjoy attending other conferences/seminars and hearing other speakers, as I always learn something new. You also have an opportunity to reflect on your own work/cases when away from your offices (it’s funny isn’t it that you often get your best ideas when doing something different away from your desk!)

In terms of forthcoming SEN events, the only things that have caught my attention during the Spring Term are:


Once again, I will be speaking at the Jordan’s Conference (this will actually be my 12th year speaking there!) So, if you are there, please stop by and say ‘hello’ if you can. 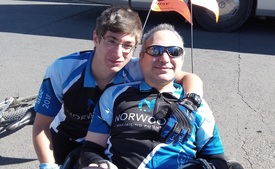 “I’VE DONE IT AGAIN!”
It’s amazing how things work out sometimes, isn’t it?

In November 2015, I successfully completed my 6th annual 5-day international bike ride to raise funds for Norwood, a charity that supports children and young people with disabilities, using a specially modified recumbent trike. This time I was riding 400 km from the middle of the Negev Desert up to the big hills of Jerusalem (again in Israel).

I am glad to also be able to report now that I managed to raise the £15,000  target that I was hoping to for Norwood.  I also wish to thank those of you who read this update who kindly sponsored me.

I must say though that this was probably the most ‘challenging’ ride that I have ever done. It even included riding up one of the biggest mountains (assisted by a professional cyclist) on the 4th day of the ride.

Also, for the second time, I did this ride with my 18 year-old son, Zachi.  Although he did not ride up the mountain himself that afternoon, he helped me considerably by passing me at one point in a van with a beat-box loudly playing out the song ‘Eye of the Tiger’ which was the theme tune to one of the ‘Rocky’ films, which motivated me to keep going to the top.

See, people sometimes help you in all sorts of ways!

So now what? ​
With best wishes

P.S. I always find it helpful to find out what people think about my updates, so please take a few seconds to tell me what you think by going to: Spring Term 2015-16 'SEN Update – Your Thoughts’ - there are just 3 quick questions.
Back to top