SOME THINGS ARE WORTH REPEATING (PART 2)

This is an extract from my
Summer (Half) Term 2017/18 'SEN Update' entitled:
“THAT'S NOT HOW IT'S MEANT TO BE!”
​that was released on 8th June 2018.
Don’t forget, to ensure that you never miss out, you can get my SEN updates by completing your email details below, reading it on our ‘SEN.fyi’ App, or by following me on one of the Social Media platforms that I use, which are at the top of this page. 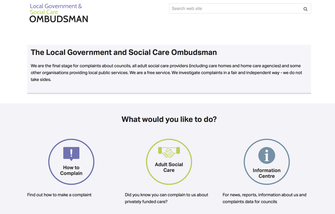 ​SOME THINGS ARE WORTH REPEATING (PART 2)
You may recall that in my Summer Term SEN Update, I gave a summary of what most of the speakers had said at the SEN Law Conference held at the beginning of March 2018, but I also said that I would dedicate a whole section of my next Update to what Mick King, the Local Government and Social Care Ombudsman (LGSCO) had said, as I found his talk very enlightening.
​
Mick started by outlining the role of the LGSCO (i.e. with sections about ‘who we are’, ‘what we do’ and ‘how we do it’).  He also looked at the role of the LGSCO in SEN complaints.  We were then given a typical case example, before he looked at themes and trends in SEN casework and finally looking at the future and what lies ahead.

Mick said that the LGSCO had twin aims, to remedy injustice and also to help to improve services (both of which supported public accountability).  He pointed out that the LGSCO service was free to use and a complaint could be made by phone or online. He said that the LGSCO could look into all local government decisions, as well as decisions by other bodies (such as Admissions Authorities) and all social care decisions (both in the public and private sectors).

Mick pointed out that remedies could include both personal things (such as an apology, a formal decision, the provision of funding for a service and financial payment/reimbursement). He also said that investigations could lead to service improvement (i.e. improving procedures or training of staff) and highlighted that there were wider learning possibilities, where things were in the public interest and sometimes they would focus their reports thematically and work in conjunction with Ofsted. He added that they would publish (almost) all of their decisions on their website at www.LGO.org.uk/decisions.

Mick finished by looking ahead and pointed out that there were increasing pressures on children’s services (but that the LGSCO make their judgements based on law, guidance and rights, not budgets). He also referred to the (then forthcoming) National Trial in the SEND Tribunal (which I spoke about in my last Update), making recommendations about health and care provision, as well as educational provision, including the need for more joint working with the Parliamentary Health Service Ombudsman (PHSO) and the (then impending) deadline for transfer of Statements to EHC Plans, saying that maintaining provision is key.

It was very interesting for me to learn that, out of all the 19,000 complaints that they received in 2016/17, 17% of them were in relation to Education and Children’s Services (such as SEN, Children’s care, safeguarding, school transport, admissions and exclusions).

It seems to me that the LGSCO may not be as well known about, as he/it should be.
With best wishes