SOME THINGS ARE WORTH REPEATING (PART 1)

This is an extract from my
Summer Term 2017/18 'SEN Update' entitled:
“Can't I Even Leave You for A Minute?"
that was released on 27th April 2018.
Don’t forget, to ensure that you never miss out, you can get my SEN updates by completing your email details below, reading it on our ‘SEN.fyi’ App, or by following me on one of the Social Media platforms that I use, which are at the top of this page. 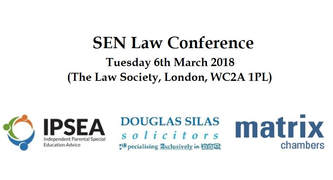 As you may know from my last update, the new annual SEN Law Conference, which I staged jointly with IPSEA and Matrix Chambers, was held on 6 March 2018. I am delighted to say that it was sold out to over 200 people a few weeks beforehand and seemed to be enjoyed by many differing types of people on the day, who were professionally or personally involved with SEN issues.

However, I know that there were some people who could not attend, so I thought I would share with you here now a few things from the day, which may be of interest to you – even if you were there!

We first of all heard from Ali Fiddy, the Chief Executive of IPSEA. Ali spoke to us about SEN from a parents’ perspective and opened with the now well-known d phrase: ‘Law trumps policy!’ She outlined a number of parts of the Children and Families Act 2014 and pointing out the still lack of enough joined-up working (referring also to The Children Act 1989 and the Care Act 2014).  She also talked about continuing difficulties with lack of specificity in Education, Health and Care (EHC) Plans and spent a little time criticising the formats of some EHC Plans (for example, not linking provisions to outcomes, or not following the correct order of sections).

Ali also discussed difficulties she had seen with transferring Statements of SEN to EHC Plans and highlighted some unlawful transfers due to:


We then heard from Mick King, the Local Government and Social Care Ombudsman (LGSCO). I found Mick’s talk quite enlightening, so I have dedicated a whole section of my next SEN update to what he said (that will be Part 2).

After this,we then heard from André Imich, a SEND Adviser from the Department for Education (DfE). André said he wanted to also look at the SEND Reforms from 1st April 2018, by which time most children and young people with SEN had been transferred from Statements to EHC Plans (although he acknowledged that there were still some transfers taking place and, for those people, the legal requirements of their Statements would continue).

In a fairly upbeat presentation, André spoke about things like the co-production of EHC plans working more now for many young people and parents, but how there were also still challenges for a few Local Authorities (LAs). He said that there were some LAs who were doing things more successfully than others and we needed to learn from them.  He also referred to statutory duties having to be met, but acknowledged that some health and care provision was still not being sought properly in assessments, with the result that some EHC Plans that had been produced were not good.

However, he also told us that there had actually been increased satisfaction in accessing local services (I know that some people do not agree with this) and that there seemed to be improvement in attainment for children and young people with SEN in the past year, compared to the year before. He said that there were more young people going on to post-16 education, training and employment, but admitted that that the quality of EHC Plans seems to vary widely and the outcomes on them are often still too general (as quoted from Ofsted and CQC).

Finally, he said that parental confidence had been improved with the whole SEND system and that it was important that SEND issues covered the 14.4% (who received school-based SEN support), not just the 2.8% (who had EHC plans).

We then heard from Colin Diamond, the Director of Children and Young People at Birmingham City Council, who spoke to us about ‘LAs and SEND: Opportunities and Challenges’. He highlighted the fact that Birmingham covered a very large area with over 9,000 EHC Plans, 446 Schools (including 27 special schools) and more than 205,000 pupils/students - 33% of whom were in child poverty and 30% of whom had English as an additional language).

Whilst Colin pointed out at the start that he could only speak from his personal experiences in Birmingham, he gave us a very thought-provoking talk and pointed out a number of challenges also being opportunities.  For example, he spoke about mainstream schools’ approaches to inclusion being influenced by perverse incentives sometimes and suggested introducing more sophisticated baselining and attainment/progress methodology.  He also pointed out how we had seemed to become over-reliant on EHC plans, but said that these were expensive, bureaucratic and often added little value and that perhaps we should start thinking about using models where more resources could be guaranteed to schools.

As one of the chair-people said afterwards, listening to Colin was like listening to one of your best teachers at school, because of his clear passion for what he did!

After lunch, I gave a talk about advocacy in the SEND Tribunal and pointed out that winning an appeal is not just about advocacy, as it is really only one part of an appeal. I highlighted the need to prepare your case properly and to try and make things simple to understand. I also highlighted the fact that you should not over-complicate things and should always plan strategically and ahead, as well as review your case critically as soon as you can.

We then heard from Judge Jane McConnell, the lead Judge at the SEND Tribunal. Jane also spoke to us about challenges and opportunities and reiterated that we needed to look at legal tests. She spoke about how the Tribunal were often finding unclear reasons for LA decisions or a lack of evidence from EHC needs assessments.  She also highlighted again difficulties with the format of EHC Plans and stressed to us the importance of getting your evidence correct, both in writing and orally.

Jane pointed out a few procedural changes which had been introduced over the last year by the SEND Tribunal (such as refusal to assess appeals now being listed as ‘paper hearings’ and the increased use of a [revised] ‘Request for Changes’ form) and also spoke about procedural changes that would be coming this coming year (such as revised bundle guidance, which will cap the number of pages of evidence each party can submit in an appeal [in addition to a ‘core’ bundle] and that the Tribunal would be revising their guidance for professional witnesses).

Jane then spoke to us about the introduction of the National Trial, which gives the SEND Tribunal additional powers now to allow them to make recommendations relating to social care and health, as well as educational decisions (which has now started for decisions about children/young people with SEN from 3 April 2018). She said that the type of issues they expected (following a ‘Pilot’) were:


Jane ended by saying that initial learning from the previous recommendations pilot had been that there was more positive working between SEN and social care teams within LAs (which allowed for a more holistic view of the child or young person). She also said that health issues raised were not significant or clinical issues, but had been particularly relevant for post school/FE/residential school placements, where there seemed to be no educational need.

At the end of the day we heard from Sarah Hannett and David Wolfe Q.C., who gave us legal updates in relation to exclusions, disability discrimination and the (ever popular) breakdown of what had happened in the courts regarding SEN in the past year.

David ended his paper with a quote from one case regarding the Human Rights Act which said:

“It is a salutary reminder to all local education authorities [sic] and their staff that in performing their day-to-day functions they are discharging the United Kingdom’s obligations under the [European] Convention [on Human Rights].”

I hope that what I have said above has given you a flavour of what happened at the SEN Law Conference this year and hope that you will be able to join us at the 2019 Conference next year.
With best wishes