This is an extract from my
Spring Term 2017/18 'SEN Update' entitled:
'Something To Think About...'
that was released on 12th January 2018.
Don’t forget, to ensure that you never miss out, you can get my SEN updates by completing your email details below, reading it on our ‘SEN.fyi’ App, or by following me on one of the Social Media platforms that I use, which are at the top of this page. 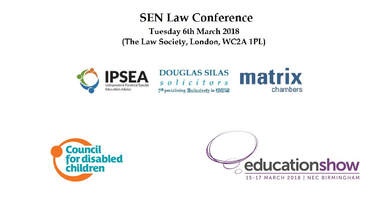 In my last SEN update, I referred to the Westminster Education Conference taking place on 9 November 2017 entitled:  ‘Next Steps for SEND Policy – SEND Reforms, Funding, Local Area Inspections and Best Practice in Provision’. Unfortunately, due to scheduling difficulties, I was unable to attend it personally, but still obtained a transcript of the event afterwards, which was very interesting to read.

Again, I was struck by one of the keynote speeches given by Dr Adam Boddison, the current Chief Executive for nasen (the National Association for Special Educational Needs).  His talk was entitled: ‘SEND policy – Key issues and next steps’ and he spoke about issues concerning accountability, funding, inclusion and other related things.

I was surprised to learn that there are now more pupils than ever before at special schools (although, to be fair, there are also more pupils generally) and he also said that 44% of children with Education, Health and Care (EHC) Plans are now placed in special schools.  When talking about inclusion, I was also surprised to learn from him that children and young people with SEN are still seven times more likely to be excluded from school (he said that he felt strongly that no child should ever be excluded from school).  Adam also pointed out that some mainstream schools now seem to be magnets for attracting children and young people with SEN and that other mainstream schools seems to be happy just referring them onto them, rather than taking them in.

For me, the most telling thing that Adam said (which I have also found from my professional experiences) is the importance of making sure that an EHC Plan is right from the outset and also all along, as it can affect a child and young person’s education/provision/placement later when Post-19 (or as I have seen, in Post-16 cases as well).