MY NEW WEBINAR: ‘WHAT YOU NEED TO KNOW (THE NEW SEN FRAMEWORK)' 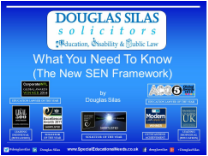 MY NEW WEBINAR:
‘WHAT YOU NEED TO KNOW (THE NEW SEN FRAMEWORK’)

It’s now been just over seven months/two terms since the implementation of the new SEN framework, that was brought into legal effect on 1 September 2014, as a result of both the Children and Families Act 2014 and the new SEND Code of Practice.

In fact, there is now already a new Code of Practice that came into effect on 1 April 2015  which you can find here.

Whilst everybody has been trying their best during these past few months, I am afraid that there still are many conflicting things happening. For example, now that there is more ‘localism’, every Local Authority (LA) seems to be doing something slightly differently to the next regarding the Education, Health and Care (EHC) needs assessment process, or when transferring Statements of SEN to EHC plans; usually using their own ‘interpretation’ of what the law says and what they should do.

Ironically, each LA is often entirely convinced that what they are doing is right and that everyone else is wrong or treading on the legal borderline of doing things. Also, parents in one LA are being told one thing, whereas parents in another LA are being told something else. This is not only confusing many parents, but is also confusing a lot of professionals.

So, I have decided to see if I can help everyone out again. As you may know, over the Autumn and Spring Terms of 2014/15 (i.e. the last two terms) I have been providing training about the new SEN framework to lots of people, by either being requested to go into organisations personally to train their staff ‘in-house’ or by running my own training days at my offices for smaller groups of individuals.

However, as I will now not be providing any further training days at my offices until the Autumn Term 2015/16 (although I am still being booked to deliver training ‘in-house’ during the Summer term where my diary allows), I have decided to try and clarify things for everyone.

So, in case you couldn't make it, I am now putting on weekly one-hour webinars over the Summer Term 2014/15 entitled ‘What You Need To Know (The New SEN Framework)’ (at the moment they are going to run on Thursday and Sunday mornings at 9am or evenings on those days at 9pm - a recording will also be available ‘on demand’ if you cannot wait for it!)

I have written the webinar based on my full training so that it, hopefully, comprehensively outlines what parents of children/young people with SEN or professionals working with them need to know about the new SEN framework. It is also CPD-accredited for one-hour for those who need it.

I have done things in this way as I know that many people were unable to attend my training days or get to see me speak at other events due to a number of differing reasons (e.g. geographical distance or time restraints etc.)

I have also done things in this way as I wanted to make things accessible for everyone – you can now get my training on a computer at home or work, or even on the move by using a phone or tablet! (There is also a transcript for anyone with a hearing impairment).

And the best bit -  I have also decided to offer this webinar for free! This is because I want everyone to be able to see it, no matter what their means or circumstances. All I  ask in return is that, if you do watch it and it helps you,  you also tell other people about it and direct them to it so they can watch it themselves.

You can register for the webinar right now by going to:

'What You Need to Know [The New SEN Framework]' (Webinar)
I have also learnt from from doing my training that many people are still very confused about some things, like the procedural/substantive requirements of transferring Statements into EHC plans, the legal requirements for EHC needs assessments, or what should actually be where in the plans themselves - especially the ‘Outcomes’ section.

I have therefore already decided that I will be writing/running a new training presentation in the Autumn in relation to these topics, as well as covering other things (such as the requirements of the the new Code of Practice 2015/the Care Act/SEND Tribunal Practice and Procedure etc. - see more below regarding the last two things).
With best wishes