“A PLACE AT THE TABLE”
​(MEDIATION FOR YOUNG PEOPLE)

This is an extract from my
Summer (Half) Term 2018/19 'SEN Update' entitled:
“YOU CAN HELP ME BY NOT HELPING ME!​
​​​​​​that was released on 14th June 2019.
Don’t forget, to ensure that you never miss out, you can get my SEN updates by completing your email details below, or by following me on one of the Social Media platforms that I use, which are at the top of this page. 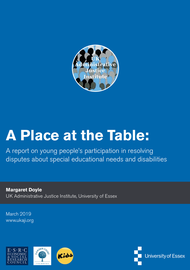 I recently had the pleasure of attending the launch event for the project report called ‘A Place at the Table: a report on young people’s participation in resolving disputes about special educational needs and disability’ written by Margaret Doyle (who is herself a trained mediator).

Again, it may be easier for you to read the full report which you can find here. However, I know that everyone is very busy so it may be easier if I try to summarise a few things for you here.

Probably the best place to start is to quote the text from the report’s website which states as follows:

‘Decisions made by local authorities on SEND provision reflect many aspects of concern in administrative justice, including the quality of initial decision-making, accountability of public bodies, human rights considerations in the delivery of public services, mechanisms by which people can challenge and appeal such decisions.  The project has sought to contribute to our understanding of the way these aspects of administrative justice are experienced through the mandates of children’s rights and participation and access to justice to our knowledge from a best practice for including children’s and young people’s voices in the process.

The project has focused primarily on young people aged 16-25 in England and their involvement in SEND mediation. Reasons for this focus includes the new rights conferred on young people at age 16 by the Children and Families Act 2014; the steep increase in mediation numbers, from 75 in 2014 to nearly 2,500 in 2017, and the distinctive fault of parties in mediation, as decision-makers, which differed from their role in tribunal appeals or ombudsman complaints.  The expectation is that it will be of value to the issue of participation of children and young people of all ages and in other jurisdictions and in other forms of complaint and dispute resolution, including appeals to the SEND Tribunal and complaints to the Local Government and Social Care Ombudsman.

The report draws on interviews and discussions; documents produced during the project, including blog posts and a briefing paper; and a summary of a round table discussion held in June 2018. Participants, who have been hugely generous with their time and contributions, have included mediators, tribunal members, local government, advice and advocacy organisations, parents/carers and expert academics.

Three key things have been explored in this project:


I can also probably do no better than to quote from the ‘Emerging Findings’ in the report itself as follows:

‘During the course of the project, key messages have arisen that go beyond mediation and tribunal practice needing to adapt for more inclusive participation.  A key message is that ‘participation’ covers a range of types and levels of involvement, from expressing views to making decisions.  In the SEND context, it is important not to see this range as a hierarchy, with some types of participation more valuable than others.  Facilitating participation and taking account of children and young people’s views have long been emphasised in the SEND Code of Practice.  However, in the context of legal advice under the Children and Families Act, it is decision-making rights for young people that are new.  Yet it is currently difficult to determine the extent to which young people are exercising their rights to request mediation and to register an appeal to the SEND Tribunal because the data is not collected.  The conclusion reached in this project is that few young people are doing so.

It also appears that a small number of young people attend SEND mediation or SEND Tribunal hearings.  Figures from one SEND mediation provider, which works with about one-third of all local authorities in England, suggest that children and young people attend mediation in only 8% of cases.  The extent of children and young people’s involvement is not possible to determine from the collected data, so this figure is likely to reflect a range of levels of participation, including attending only and not being involved in meaningful decision-making.’

Margaret goes on to say:

‘The emerging findings suggest that:

3.    Parents face a significant change in role as their children grow up and become rights holders, and they may need support in how to move from being advocates for their children to supporting their children to take a lead as decision-makers. The concerns that parents express about decision-making rights of young people with SEND reflect the importance of the relationship and the need to address their anxieties as well as those of young people themselves. Yet little support is available specifically addressing this.

5.    Addressing both attitudinal and practical barriers may require a significant shift in culture and in political will to provide the information and advice infrastructure necessary for the exercise of those rights to become a reality. Significant changes in the information and advice infrastructure (rights awareness, legal aid, SEND expertise, advocacy) are needed to make exercising this right a meaningful and realistic option for those children and young people who choose to do so. The responsibility for these changes rests primarily with local authorities and the Department for Education as the statutory bodies, but they cannot happen without the involvement and commitment also of schools and colleges, health and social care professionals, parents, and mediators and tribunal members.

6.    Insufficient data are collected and published by mediation providers and the SEND Tribunal to allow for a full picture of young people's participation. The rights for young people enshrined in the Children and Families Act are not being reflected in procedures and practice, and this contributes to a lack of administrative data on, for example, numbers of young people participating in mediation and tribunal hearings. Help will be needed from the Department for Education and local authorities.

7.    Mediators and mediation providers could be doing more to engage with young people directly and to adapt their processes to be more flexible and inclusive. This includes initial awareness raising and providing information that is accessible to young people. The Professional Standards for SEND Mediators could be more detailed in the expectations of what training and experience are required of mediators in relation to working with young people with SEND.
​
8.    Consideration is needed as to how young people can be involved as co-producers of guidance on designing/redesigning dispute resolution processes that facilitate their participation as decision-makers. This is a design challenge, however, to ensure that such co-production is not tokenistic and exploitative, and it is resource-intensive if it is to be genuinely inclusive. Established participation groups of young people with SEND have an important role, but they are not intended to be representative of young people generally, and there will be a range of views and preferences as well as a range of needs to take into account.’

Finally (at the end of the ‘Executive Summary’), Margaret’s says the following under ‘Recommendations’:

‘A number of ideas have been generated from engaging with supporters from a range of perspectives.  The ideas have led to recommendations for improvements in practice and for further research, which I have set out in more detail in the final Part of this report.’

Again, I do not think I can say very much more, can I? Can I suggest again that, if this is something which may/should be of interest to you, it is probably better to read the report in full which, again, you can find here.
With best wishes