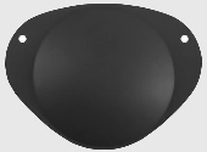 Unfortunately, as well as causing me mobility and coordination difficulties which requires me to use a wheelchair, my condition of Cerebellar Ataxia also causes me a great deal of double vision.

I needed an operation on one eye many years ago to correct a very severe squint that I had developed. Unfortunately, as mine is a deteriorating condition, in the past few years my double vision has been getting much worse (although I am still trying to put off for as long as possible the time when I will need a further operation on my other eye).

Earlier this year, as things have been getting increasingly difficult for me, I decided that I would start using an eye patch over one eye, to try and reduce the double vision (as I would then be only looking through one eye, which allows me to see things in single vision).

At first, I only started using the eye patch at home and in the presence of my small team at work.  However, during the past couple of months, I decided that, rather than trying to ‘bluff’ people (I have always realised that other people cannot see what I can see!) I would start using an eye patch in public more, when I needed to.

I had already scoured the internet, to buy and try many different eye patches (it can be very expensive being disabled you know) until I settled on getting one (and now a collection of many brightly coloured ones) from the appropriately named ‘The World's Best Eye Patch’ website.

I also resigned myself to having to hear the pirate/parrot jokes from people but found, interestingly, that most people seeing me with my eye patch on for the first time either seemed to actively try and avoid speaking to me or, if they did have to speak to me, tried to not say anything about my wearing it - it was like the proverbial ‘elephant in the room’.

That being said, there were some funny situations, for example, when a good friend of mine, passing me with my eye patch on for the first time, put on a stereotypical pirate accent (“Ahoy Matey!”) but then returned to me a few minutes later to apologise. I mischievously just replied to him:

“It’s alright, I’ll just get my parrot to come and speak to you next time!”.

The nicest thing that happened to me though, was when I was approached by a young boy of only about 7 or 8 years old with a lollipop in his mouth. He literally just came up to me and said:

“Hello 'Mr Man with an eye patch' – why are you wearing that?”

I simply replied: “It’s because my eyes don’t work properly.”

“OK” he said and then just walked away!

I love it that children can often be the most direct to you, but so willing to just accept things as normal…