IF I FALL, WILL YOU CATCH ME

This is an extract from my Autumn Term 2016/17 'SEN Update' entitled:
“Time To Simplify Things!"
that was released on 9th September 2016. 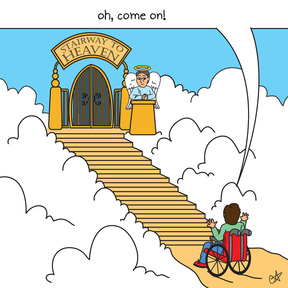 IF I FALL, WILL YOU CATCH ME?
As a wheelchair-user, I could recount for you countless times that I have fallen out (or rather been thrown out) of my wheelchair!

But to end this update, I want to share with you just one story that happened to me a few months ago...

That day, I had decided to try and get by myself to the local high street (I know that for most of you this is a normal every day event, but for me it is something which has to be planned out meticulously with military precision, such as the route and pavements I have to take) in order to just get some cash out from the ATM (unfortunately, ATMs are also usually placed a bit high for me to operate when sitting in my wheelchair).

Anyway, on this occasion, I managed to successfully get to the ATM and take some money out. I was riding back to my office when I had to cross a road.  Having checked to make sure that no cars were coming, I managed to get down from the pavement onto the road using a dropped-kerb, but when I reached the other side of the road, the dropped-kerb there had a ridge, so that when I went to mount the pavement again, my wheelchair hit the bottom of the kerb and stayed there, flinging me forwards and out of the wheelchair.

The way that I flew through the air with my face forwards must have looked quite spectacular. I remember feeling that it was all happening in slow motion and realising, as I moved through the air, that any second I would hit the ground face first and would probably smash my glasses and injure myself.

However, just as I was about to hit the pavement, I suddenly felt two hands appear under me that caught me just before I hit the ground. It was like a miracle; I was just stopped a few inches from the ground and, although it probably only lasted a few seconds, it felt like I was stuck there for a long time. I could hear the man whose hands had caught me struggling to lift me back into my wheelchair.  However, again almost miraculously, another pair of male hands then appeared under me from the other side and together the two men pulled me back upright and into my wheelchair.

I then saw that it was two builder-type men who had saved me, but when I had sorted myself out and thanked them both profusely for what they had done, they both just replied, almost nonchalantly, that it was ‘nothing’.

I know that this may sound funny to you, but I really feel that my being physically disabled, sometimes meaning that other people have to come to my rescue, allows me to experience goodness from people that I may not otherwise see.

So, if I fall, will you catch me?
With best wishes