HOW ARE WE DOING… (SEN STATS)

This is an extract from my
Summer (Half) Term 2016/17 'SEN Update' entitled:
“We’re Almost There!”
that was released on 9th June 2017.
Don’t forget, to ensure that you never miss out, you can get my SEN updates by completing your email details below, reading it on our ‘SEN.fyi’ App, or by following me on one of the Social Media platforms that I use, which are at the bottom of this page. 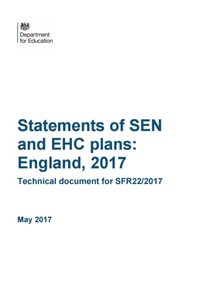 When I said that ‘We’re Almost There!’ in the title of this update, it actually had a double-meaning to it, because this phrase not only applies to the end of the academic year, but it could also be said to apply to the change that we have been undertaking during the past few years to the new SEN framework with the introduction of the Children & Families Act 2014 and the ongoing requirement to transfer Statements of SEN to Education, Health & Care (EHC) Plans, by 1 April 2018.

My anecdotal evidence, as I have said before, is varied. I do realise that often a parent only comes to see me when they are already having difficulties usually with their Local Authorities (LA), for failing to do things properly or to stick to legal timescales.

Fortunately for me, at around this time of year, the Department for Education/Government usually produces their annual statistics and analysis about Statements and EHC Plans (most recently) in England.

The latest version was issued on their website at the end of May 2017 and there are a number of different versions that you can find here.

‘This statistical first release (SFR) includes information on:
It is based on the statutory SEN2 data collection.’

I would mainly like to refer here to the last of these 4 bullet points by referring to the document entitled ‘SFR 22/2017’ which runs to just 4 pages.  It makes for very interesting reading.

However, I need to initially give you some background context as well.
The opening section is entitled: ‘The total number of statements and EHC plans has continued to increase…’ and states as follows:

The combined number of children and young people with statements and EHC plans has increased each year since 2010.’

Alongside this, the document has a graph/table dating back to 2010 which shows that, although there has was a year by year increase slightly on, initially Statements, and then, from 2015, EHC Plans, the most significant increase has been during the past year.

The document then has a second (alongside another graph/table) with statements such as:
​
There then are 11 sections in the report dealing with things like:


​There is also information about things like ‘Personal Budgets’ and ‘Mediation Cases’.

However, I would like to concentrate here on the section entitled ‘Transfers from statements of SEN and learning difficulty assessments (LDAs) to EHC Plans’, which states as follows:

Transferring children and young people with statements and young people receiving support as a result of a learning difficulty assessment (LDA) to EHC plans will be phased. Timescales are set out in Special educational needs and disability: managing the September 2014 changes to the system.

Every local authority has published a Local Transition Plan setting out the timings for transfers to the new system.

Between January 2016 and August 2016, there were 5,283 young people transferred from LDAs to EHC plans and 887 young people with LDAs assessed and a decision was made not to issue an EHC plan.’

I know that I have discussed the difficulties with transfers from Statements to EHC plans in my previous updates, but it does concern me to read that now, with less than a year to go until the legal deadline for children and young people to be transferred from statements to EHC Plans, we still seem to be not as far along as we should be?

I do wonder whether people in the Department for Education/Government, are, metaphorically, ‘sticking their heads in the sand’, because it may be unrealistic to expect LAs to be able to properly transfer all of their statements to EHC Plans by next April 2018, without just rushing through things as ‘tick-box’ exercises, or just not being able to do them within legal timescales/in time.

Is it just me that thinks like this? (If so, I apologise for taking up your time). I am sorry to go on about this issue, but it really does cause me some concern and, if not, it is only fair that I share my concerns with you.