This is my last update for 2014 so you will not now hear from me again (unless you follow me on Social Media) until the beginning of the Spring Term 2015 .

Either way, can I ask that this time you still read the last section of my update, even if you do not read anything else as I am hoping that you can help me help others (it will all become clear when you read it).

In this update you will find sections entitled:


As I always say, I know how busy everyone is, so please feel free to read just the sections that are of interest to you or read everything; the choice is always yours.
(Don't forget that to ensure you never miss out, you can get my updates personally by email by completing your details below or by using our Social Media links)

Well, 1 September 2014 ushered in a new area for the SEN framework; but it felt like it came and went in the blink of an eye.

There did not seem to be very much media coverage about it, which was strange given the fact that the subject had made so much ‘noise’ during the past four years.  To be honest, it felt like a bit of a ‘damp squib’.

During the past couple of months I have been attending seminars & conferences and also providing training to many people, both parents and professionals, about the new SEN framework. Somewhat surprisingly though, I have found that, overall, although everybody is still getting to grips with what they need to understand and/or do, the general sentiment seems to be that the changes were not as catastrophic as people thought that they might be.  In some ways, it seems to be ‘business as usual’.

But, paradoxically, there is also a feeling that the SEN system is very different now to what it was and there is lots of work to be done (for example, transferring 'Statements' to 'Education, Health & Care (EHC)' plans.)

Some people are already becoming concerned that many Local Authorities (LAs) said that they were ready for the changes (I have heard it said that the figure was 90%) but, in hindsight, that this was perhaps not the case. This means that the Government was possibly proceeding with unrealistic expectations and planned timescales.

There seems to be a big concern (from both parents and LAs) about the process of transferring ‘Statements’ to ‘EHC Plans' and how long this is going to take in practice. As there is a lot for me to say about what should happen during the transitional period (September 2014-April 2018), rather than me using up space here discussing it, I have created a dedicated page where you can read more here: 'Transitioning 'Statements' To 'EHC Plans'

Another example though is that it appears that there is not yet as much as was hoped would be available out there about post-16 provision (i.e. FE colleges/apprenticeships/training, etc.), although I appreciate that I may just not be personally aware of it yet.

Some of the main issues that I am already finding people asking me about are in relation to post-16 and mental capacity issues, so I have dedicated the next section of this update entirely to this.

POST-16/MENTAL CAPACITY ISSUES
One of the main concerns at the moment of many parents of young people about to turn 16 years old or who are over 16, is the fact that legal rights in determining and challenging any decisions about their education/training provision, now automatically transfer from the parent to the young person themselves at the end of the academic year in which they turn 16, provided that they have ‘mental capacity’.

Unfortunately, the new SEN Code of Practice is not very clear about the issue of mental capacity; aside from saying that a young person is assumed to have capacity, unless it is established that he/she lacks capacity after all practicable steps have been taken to assist him or her. We have also been told that making ‘unwise decisions’ is not the same as lacking capacity!

The Office of the Public Guardian (OPG) produces detailed guidance about the role of the Court/Deputies, how to make an application to the Court, how the Court appoints a Deputy to act and how they should make decisions on behalf of someone who lacks capacity. It also gives guidance on a Deputy’s duties and the consequences of not carrying them out responsibly.

Although I would encourage anyone who has these concerns to look at the relevant information for themselves, it may be helpful if I try and summarise things for you.

So, again, as there is a lot of information for me to pass on, I have written a dedicated page about this, so if this is of interest to you, you can read more here: 'Post-16/Capacity Issues' 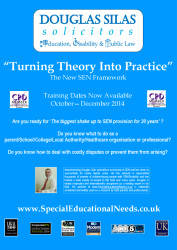 “CAN YOU DO IT AGAIN?” (TRAINING)
As you may know from my previous updates, I have been training people on the new SEN framework (both parents and professionals) during Autumn 2013, by holding (CPD accredited) training days at my offices called ‘Turning Theory into Practice’.

I have also been providing this training and shorter, half-day/single onsite sessions, called 'What You Need To Know' (again CPD accredited), focused on the new SEN framework, for a number of parental organisations, schools, LAs, professional organisations, etc.

I had arranged five training days (for a maximum of 15 delegates) at my offices between October and December 2014 which were aimed at:


I have now already done three of these. Delegates have told me that they have enjoyed having a more intimate group setting which has allowed them to interact more with me/others and have given comments like:
"Excellent day - very helpful; learnt a lot."

"This is the first training session that I have come across which has given me the relevant information without a 'spin' put on it."

"The small group made the training feel very personal and understandable;  the delivery felt sincere and considered.

"Thank you Douglas for a most interesting and informative day!"
Although there are still two dates still to go (Tuesday 18 November 2014 and  Wednesday 3 December 2014), the main question that I have been asked recently by people who cannot attend my office (or get their organisation to get me down so that I can provide training onsite for them) is “Can you do it again?”

Although I aimed the days initially at different groups (even though it is the same content for CPD purposes), some people have not been able to attend on particular days so they have been joining other days where they can. I have then seen how everyone seems to benefit also from hearing the views of others with different perspectives.

Therefore, I have decided to put on these training days again during  Spring 2015 that will be open to everyone. I will arrange these soon and will let you know the dates in my next update.

Aside from receiving training from me directly, it is also a good opportunity to meet like-minded people (or for that matter to hear views from people who are ‘on the other side’) and share things within a positive environment.

Feel free to contact my offices before this to find out if we have set dates yet to book a place on 020 8349 7700 or email me directly.
You can download the flyer used so far by clicking on the picture above if you want to find out more information. 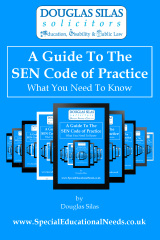 But what I have found is that people have mainly been buying the eBook directly, as this then allows them to get all versions of it (i.e. for all their devices, as well as a PDF to read on their computer) so that it is always to hand!

I know that some people only get a copy of it when they suddenly find themselves in difficulty and need to find out more about what the law says, but I actually think that people are usually better off with a ‘prevention’ rather than a ‘cure’ approach.

The Guide is easy to get hold off by going to www.AGuideToTheSENCodeOfPractice.co.uk. I know that some people only get a copy of it when they suddenly find themselves in difficulty and then need to find out more about what the law says, but I actually think that people are often better off with a ‘prevention’ rather than a ‘cure’ approach.

As I have said before, I truly hope that by writing this guide, I have helped more people.

If you have been reading my updates over the past few years, you will know that, at about this time of year for the past three years, I have undertaken four international bike rides to raise money for Norwood (a charity for children and young people with disabilities) using a specially modified recumbent trike.

I have so far raised (with the help of two good friends) nearly £100,000 for charity, some of which was used to fund a 'sensory garden'.

Many of you already know that I am physically disabled myself and a wheelchair-user, so doing these things are a bit tougher for me. I did two rides last year as I honestly thought that they would be my last, because of my deteriorating physical condition, as a result of my disability.

However, this year, I think that I should still be capable of doing another ride, so I have decided to ride across northern Israel again.  A number of people have already said to me “you’re mad!”, which has amused me.

I am actually flying out in a couple of days and hoping to do the ride over five days next week. So, if you want to support me (or if you feel that my updates have helped you in anyway and would like to give something back), please take a moment to sponsor me at: http://uk.virginmoneygiving.com/team/douglassilas2014.

By doing this, you will help me help more children/young people with disabilities.

P.S. I always find it helpful to find out what people think about my updates, so please take a few seconds to tell me what you think by going to ‘Autumn (Half-term) 2014 update – your thoughts’ – there are just 3 quick questions.
Back to top