​MORE OF THE SAME?
(TRANSFERS OF STATEMENTS TO EHC PLANS)

(Don’t forget, to ensure that you never miss out on one, you can get my SEN updates personally by completing your email details, or by following me on one of the
Social Media platforms that I use, at the bottom of this page. 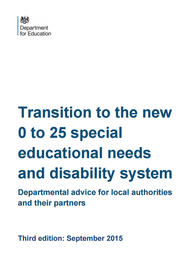 ​MORE OF THE SAME?
(TRANSFERS OF STATEMENTS TO EHC PLANS)
Since the new SEN framework came into force in September 2014, nearly a year and a half ago now, after difficulties with initial changes, we now all seem to be falling into a general and steady pattern of doing things.

As you may know from my previous SEN updates, one of the main issues that has taken up the most time for parents and professionals concerned with children and young people with Statements of SEN, is going through the transfer process to convert their Statement into an Education, Health & Care (EHC) Plan.

This is known as a ‘Transfer Review’ (individually) with timescales set by Government or in the Local Authority’s (LA’s) ‘Transition Plan’ (generally).

As you may also know, I write a regular legal ‘Question & Answer’ column for SEN Magazine. Over the past year or so, I have been exploring some of the new issues that have been brought in by the new SEN framework, such as ‘Personal Budgets’; ‘Post-16 Issues’;  ‘Outcomes’; 'Working Together’ and these further issues of ‘Transferring Statements to EHC Plans’ and ‘Transfer Reviews’ (as well as looking at the new SEN framework initially and then again one year on).

Although I specialise exclusively in SEN, I deal with a wide range of cases.  During this past year though, the most asked about issue that I have had from parents coming to see me, is the question of ensuring whether they/the LA are transferring their child’s statement to an EHC plan properly.

Unfortunately, when the new SEN framework was brought in, the Government probably issued unrealistic timescales to convert the 230,000 or so Statements to EHC plans, between September 2014 and April 2018.

Obviously, with the substantial funding cuts that there have been during the last few years (which have resulted in many experienced people losing their jobs and some services closing), there has been the combined effect with these legal changes, of many people now trying to do too much, with too little and now, often, too late.

Since September 2014, no new Statements have been issued and any assessments that have been requested or carried out, have been considered EHC needs assessments, which either lead to an EHC plan being issued or one of the following scenarios:


This is the same as it was before and therefore parents (or the young person themselves if they are now over 16), can appeal against any of these decisions to the SEND Tribunal. However, there have been increasing difficulties with transfers.

LAs now have the requirement to transfer all children and young people with Statements to EHC plans, either during a set time, or in priority order (which is too long and detailed to go into here). Importantly, all Statements must be transferred to EHC plans where a significant review of the Statement would have normally taken place at a time in their educational career (e.g. a move of school, particularly from primary to secondary school or from secondary school to a Post-16 institution).

I could spend this whole update telling you what should and should not happen with transfers, especially as I am seeing both parents and LAs making similar mistakes time and time again. But this would probably only be of interest to those of you who are actively engaged in the process now or in the near future.

Also, I now often have to advise parents based on their individual circumstances, albeit within the wider context, as well as more strategically (and funnily enough, even though they know that I only represent parents, I have even been asked questions by LA officers themselves about what the best way to do things is!)
​
Suffice it to say, I strongly encourage everyone to familiarise themselves more with the statutory requirements and non-statutory expectations relating to the transfer of Statements to EHC plans or relating to the transfer of different groups, or to seek advice specifically.  You will also find a helpful timetable at the end of the Government’s Transitional Guidance which you may wish to read.

I hope that we are not just going to do more of the same now and thereby sacrifice quality for expediency just to meet targets – like the old adage says:
‘If something is worth doing, it is worth doing well”…
With best wishes