This is an extract from my
Autumn (Half) Term 2016/17 'SEN Update' entitled:
“Name That Tune!"
that was released on 4th November 2016.
Don’t forget, to ensure that you never miss out, you can get my SEN updates by completing your email details below, reading it on our ‘SEN.fyi’ App, or by following me on one of the Social Media platforms that I use, which are at the bottom of this page. 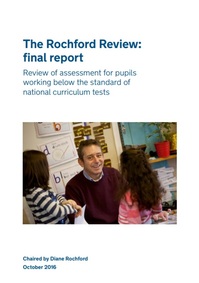 If you work in a school or are otherwise involved in education (as a parent or professional), you will probably be aware that over the past couple of years there have been a number of changes to assessment levels.

There were a number of changes during the 2014/15 and 2015/16 academic years, with the ultimate aim of there no longer being any National Curriculum levels and schools being responsible for determining their own broad and balanced curriculum.

The idea was to slim down the framework for schools to be allowed to assess pupils’ achievement levels in a more personalised and localised way.

Unfortunately, there were also a number of common misconceptions about the activities that schools were now required to undertake. Helpfully, the Department of Education (‘DfE’) prepared a document entitled ‘Running a School: Myths and Facts’ which was released in September 2015, which you can find in full for yourself, but the point was made that national tests and teacher assessments in 2015/16 would be the last time National Curriculum levels were reported.

Fast forward to now, a year or so later, as the point of this section of my update is not to look at past changes, but to look at potential future changes to assessment levels, particularly for those children with SEN who may fall below more standard levels.

As some of you will already know, the Government recently held a review (The Rochford Review) chaired by Diane Rochford, the Executive Headteacher of John F Kennedy Academy in Newham, to look at statutory assessment arrangements for pupils working below standard National Curriculum levels.

The aim of the review, as set out by the DfE, was stated as:

“The review group brought together expertise in assessment, special educational needs and working with disadvantaged pupils. The purpose was to advise the Minister of State for Schools on solutions for assessing the abilities of pupils who don’t meet the standards required to take the national curriculum tests.”

Last month (October 2015), the review group set out its recommendations in a final report (in December 2015, the review group had already published recommendations for an interim statutory solution at pre-Key Stage 1 and 2, following consultation with representative stakeholders, which schools had used as an interim statutory solution in 2016 to assess pupils working below the standard of National Curriculum tests and above the Performance scales (‘P scales’)).

However, I know that many people will just want to have a quick summary of the review’s findings/recommendations, so I did a little searching around on your behalf and found an article on the SchoolsWeek website that I think neatly summarises things.

Their summary states as follows:

“Taking account of views from Ofsted, Ofqual, the National Network of Parent Carer Forums and the Council for Disabled Children, and 1,700 responses from an online survey, the report makes the following 10 recommendations:

1. The statutory requirement to assess SEN pupils using P scales should be removed.
P scales were “designed to sit alongside, and complement, the old national curriculum, which was significantly different to the new one”. As such, 78 per cent of online respondents felt the P levels were no longer fit for purpose (although 32 per cent thought they should be revised against only 21 per cent who wanted a new framework – see recommendation 2.)

The report said there were “serious concerns” that many schools were using P scales as a curriculum, instead of as an assessment tool, thereby making activities too narrow.

Using different codes, teachers assess each child as either “below”, “at” or “above” the interim “pupil can” standard. These will now remain the key measure for all students doing subject-specific learning.

3. For those pupils not doing subject-specific learning, statutory assessment should be limited to the area of “cognition and learning”.

4. Assessing pupils against the following 7 aspects of cognition and learning should be a statutory duty, and reported to parents, carers and inspectors. (See recommendation 9 for more on this).

5. Schools should decide their own approach to making these cognition and learning assessments.
The members of the Rochford Review did “not feel it would be appropriate to prescribe any particular method or approach for assessing these pupils.”

6. Teacher training – both initially and while in the profession – should give teachers a better understanding of working with pupils who are “below the standard of national curriculum tests”.

7. Schools should work collaboratively to share good practice and should seek support from other schools if needed.

9. Of the assessment data from the seven areas of cognition and learning, there “should be no requirement to submit this to the DfE”.
But schools must be able to “provide evidence to support conversations with parents and carers, inspectors, regional school commissioners, LAs and governors”.

10. Further work needs to be done on supporting children with English as an additional language.”

From what I have seen, the recommendations seem to have been broadly welcomed, although there are criticisms also; for example, some people have concerns that the recommendations allow for progress to be untracked by the DfE, which seems to imply that it may be acceptable to not chart the progress of children at lower levels, which one critic I saw called ‘unforgiveable’.

But I cannot tell you what is going to happen and I am sure that the question of assessment levels (whether they be National Curriculum levels or P-levels) is a bit ‘Marmite’ (i.e. you either love them or hate them).